The Plymouth and South Hams Clubs combined to represent West Devon on Sunday 15th January 2017 in the Devon Inter-Area Jamboree at Plymouth Chess Club. Three South Hams club members were in the team - Steve Levy, Phil McConnell and Cliff Peach. Unfortuanately neither North Devon nor East Devon entered this year and so it was a two horse race against South Devon.

West Devon retained the trophy with a score of 7 - 5. 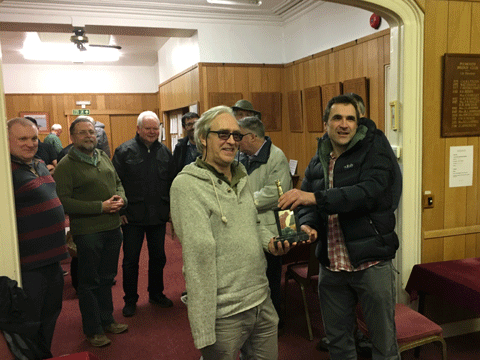 Thanks to Tony Tatam for his usual superb organisation. This is the report he posted on the Plymouth Club website.

The West were 1-3 down after the first four games and 3-5 down after eight games. South Devon needed just a win and a draw from the last four games to win but the West Devon team commenced an incredible turnaround as firstly Martin Quinn won to put them only a point behind at 4-5, the closest they had been to the South in the match. Rob Wilby then won to level the match at 5-5. Game on as the players then crowded around the remaining two boards. Phil McConnell's win over Norman Tidy put the West in front for the first time and the outcome was now in the hands of Clifford Peach on bottom board. Clifford duly delivered with a win over Mike Hussey and the West retained the trophy they had won at Exmouth last year.

West Devon have now won the Inter-Area Jamboree for the last 4 years including notable wins at Exmouth (2016) and Exeter (2015). Disappointingly East and North Devon failed yet again to raise teams to travel to Plymouth and for the last 3 occasions that Plymouth have hosted the tournament it has been a two team event between the West and South.

Some of the games played by the South Hams players can be viewed on the database of club games.