On 18th December the club met for the last time before Christmas, for a social evening of rapidplay chess, with mince pies and other nibbles.

The Committee met beforehend.  It was decided that in future the AGM should be held at the end of a season, rather than at the beginning.  Accordingly, the date for the next AGM has been set for Thursday 30th April 2015, which will be the last meeting of the current season. Decisions on additional expenditure (for example the purchase of wooden sets and boards) were deferrred to the AGM.  Phil McConnell was invited to sit on the Committee in his Webmaster capacity, and so the Committee now consists of

The Committee believes that the new format for internal competitions is very successful, and should continue for the foreseeable future.  Thanks were given to Cliff for devising and organising these competitions, and to Phil for his work on the Club website, which is considered one of the very best of chess club websites.

During the main club session, Cliff announced where we stand with the Homan League and the Dunleavy League.  As announced at the start of the season, with effect from the 1st of January, the Homan League will become the top league, and the Dunleavy League will become the second league.  Players will be allocated to one league or the other acording to thier results in the first half of the season:

Players should start arrranging their games in all the leagues, and in the Cookworty Cup, as soon as posible.  If you arrange an internal club game on a particular date, you can record it on this website (you will need to sign in first), or alternatively email Phil and he will record it for you.  Pre-arranged games can be viewed here, and also on the pages for each of the leagues.

Ken v DerekKen claims he wore this headgear at work. We think he's just trying to distract his opponent.

Tony v CliffCliff has a confident sort of look about him, don't you think?

Barry v DerekNote the table groaning with food in the background.

Cliff v TonyTime was running out at this point, and hands were flying between the board and the clock. Tony v AndersonIllegal move? 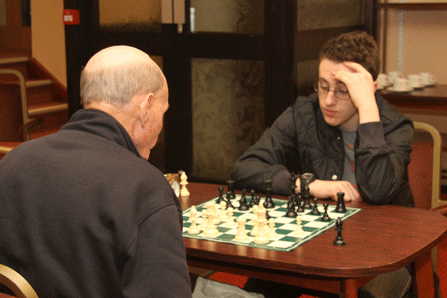 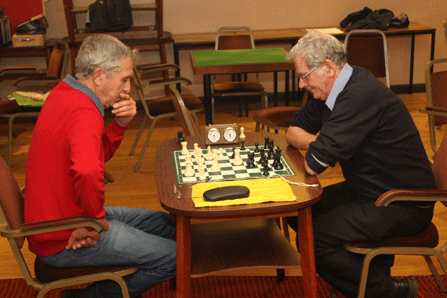 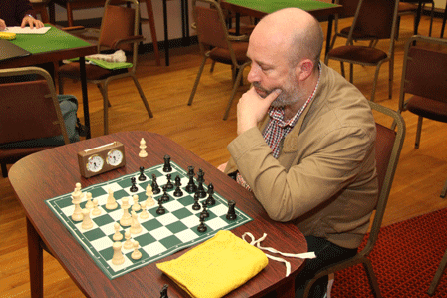 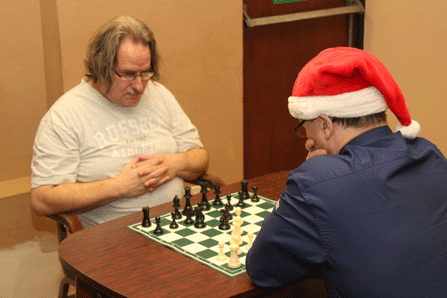 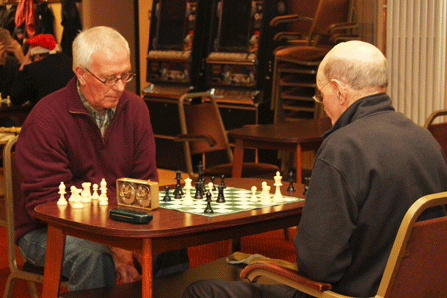 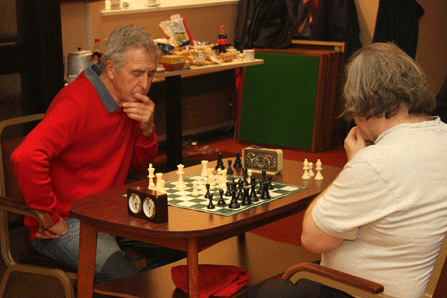 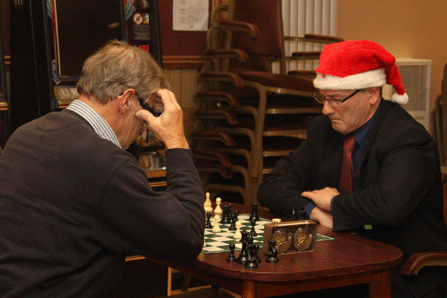 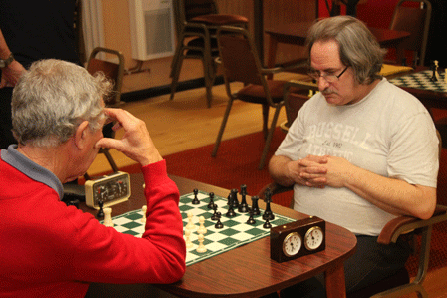 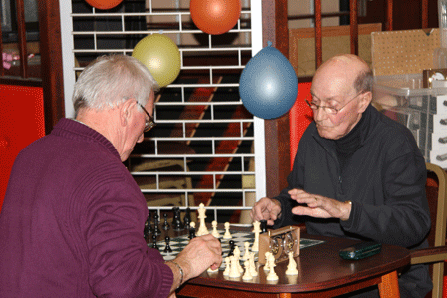 What about the chess games played on 18th December?  Before the interval for tea and nibbles, one game of half an hour each was played, with players drawn at random.  This produced wins for Roy, Phil, Ken and Anderson (the latter after a bit of controversy - if, in the spirit of seasonal goodwill to all men, you let your opponent off the rule "an illegal move loses the game", is it fair play for your opponent subsequently to claim a win by applying the very same rule?).

After tea, 20-minute games were played. Phil beat Anderson and Roy beat Ken, which meant that Roy v Phil in the third and final round was in effect a decider for the evening's games.  Roy duly won when Phil, with time starting to get short, allowed Roy to skewer King and Rook with a Bishop.  Congratulations to Roy, but Cliff perversely decided to award the bottle of wine to Phil as a thank you for his efforts on the website.

Move your mouse pointer over a thumbnail to see a larger image.

A very enjoyable evening. A merry Christmas and a happy New Year to one and all. 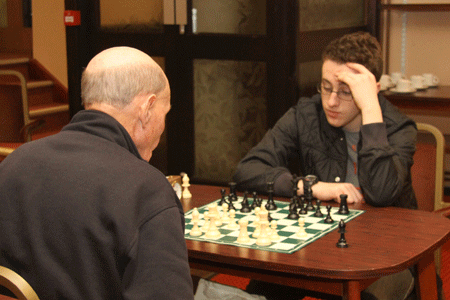 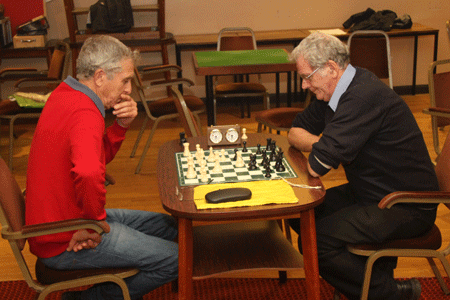 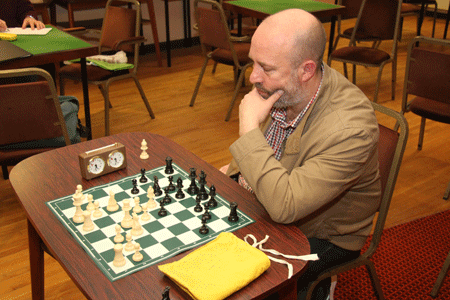 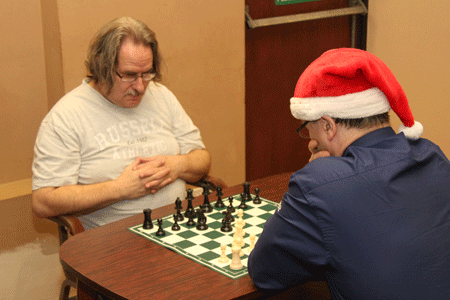 Ken v Derek. Ken claims he wore this headgear at work. We think he's just trying to distract his opponent. 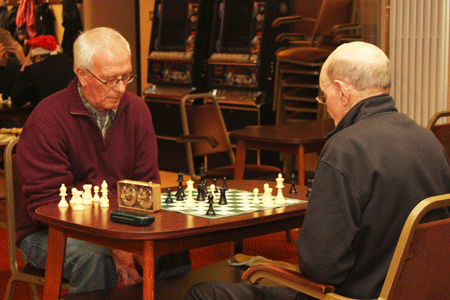 Tony v Cliff. Cliff has a confident sort of look about him, don't you think? 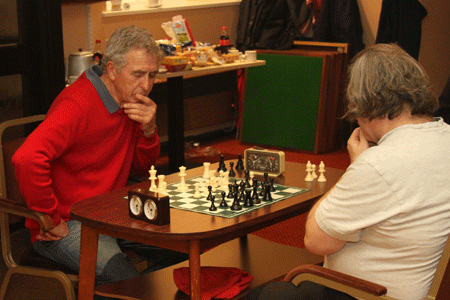 Barry v Derek. Note the table groaning with food in the background. 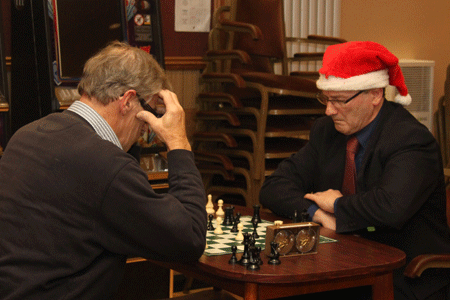 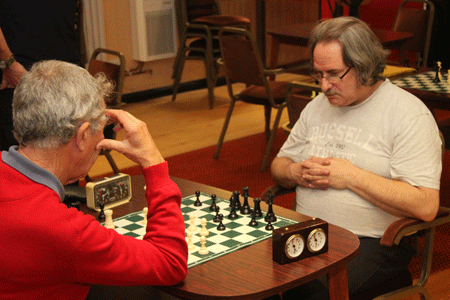 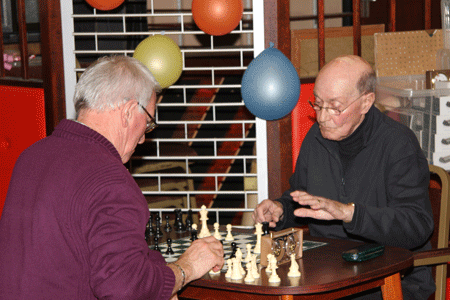 Cliff v Tony. Time was running out at this point, and hands were flying between the board and the clock.